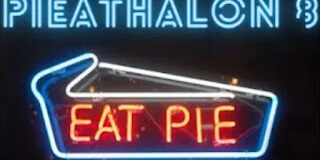 I can hardly believe that it’s time fore the 8th annual Pieathalon, organised by the fabulous Yinzerella of Dinner Is Served 1972.

Over the years, there have been good pies, shocking pies and this year for me it was frankly an odd pie. 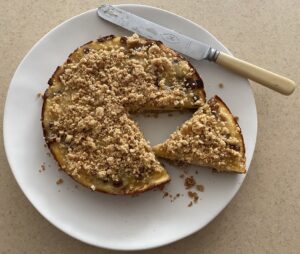 This is how it works – a group of pie lovers/general food obsessives exchange vintage pie recipes each year and Yinzerella hands us out our projects. I nominated La Tarte au Petit Suisse from Elizabeth David’s French Country Cooking – a dusty old book, one of those paperbacks that slightly smells of chocolate…. As I said to Yinzerella, when I spotted that one, I wanted to bake it straight away myself. Still on the to do list though, so I’m looking forward to reading all about this one – hope it was a good choice. Back in the day, when I used to stay with my pen friend in France, I loved the end of the meal when they brought out the Petit Suisse cheeses and fruit – one of the less challenging parts of some of the feasts presented to me as a former somewhat picky eater. I can still picture the globe artichokes – as everyone sat politely waiting for me to go first and I had no clue how to tackle the thing…

Anyway, enough reminiscing. As always I left it to the last minute to bake mine – I was allocated a Lemon Raisin Cheese Pie, from a series of recipes cards (not sure of their provenance, but I guess they came with a magazine) “Cold Dessert 2”, copyright Paul Hamlyn, from 1967, printed in Canada. 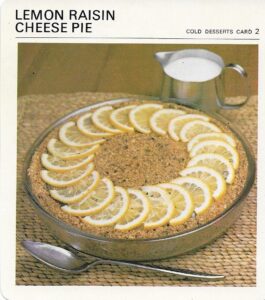 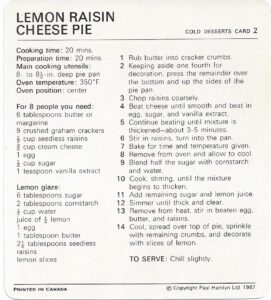 Step 1 was to make a biscuit base. As it seems you need to take out a mortgage to get Graham crackers in the UK, I went for digestives. the recipe tells you to crush the biscuits then rub in the butter. I did as I was told, but it’s a lot easier to melt the butter and stir it in for a biscuit base.

I had to do a bit of converting from cups to grams and ended up doubling the cream cheese to get a sensible consistency for a baked cheesecake. So that’s layer 2: cream cheese, egg, sugar, vanilla and chopped raisins. That is poured on the biscuit base and baked.

Next up layer 3: allegedly a glaze, but mine came out a bit thicker than that, but a spreadable consistency. That comprised sugar, cornflour, a bit more sugar, lemon juice and more raisins, on top of the baked cheese.

Then layer 4: some leftover biscuit base sprinkled on top.

The verdict: it’s fine, but I won’t be baking this one again, the faffing does not justify the rewards…

In case I haven’t managed to put you off, here are the quantities I used:

I pretty much stuck with the quantities for the “glaze”.

Check out some of the other pies – I believe you will find some here:

Biscuits for cheese
December 3, 2020
Recent Posts
NEWSLETTER
Categories
Archives
Search
Go to Top
We use cookies to ensure that we give you the best experience on our website. If you continue to use this site we will assume that you are happy with it.OkNo